Just Dance it Out... - The Sensual Revolution 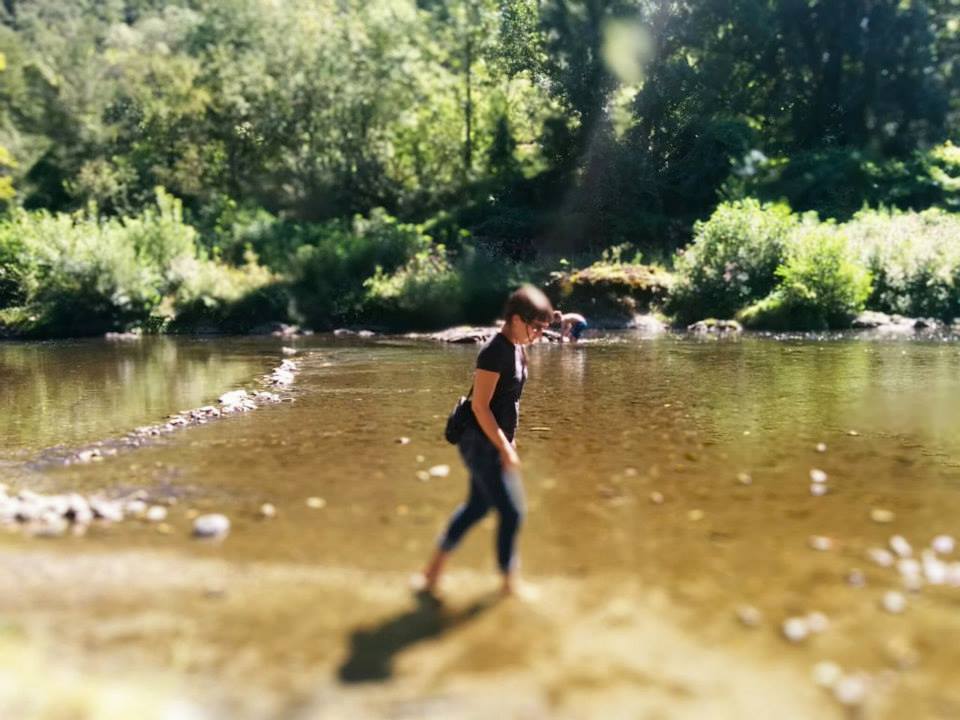 It all began one afternoon…

While I was lying down on my couch. I was in what I would now consider to be a short-lived depression. I’ve only had two moments like this in my life, that I can recall. Once when a dear family member of mine died, and in the Fall of 2014, as I was undergoing a complicated love scenario (I will go into this one another time… ) as well as having undergone one of the heaviest alcohol-drenched, yet highly expansive, summers of my life thus far. Not only was my body exhausted, so was my emotional being.

It all felt very dire. My marriage was not going well, I was in big time debt and had no idea what I wanted to do with my life. I was completely financially dependent on my husband… we had just moved to France the previous year from Montreal, Canada and I was only able to live in Europe, due to the fact that I was married to an EU citizen.

I was feeling ultimately “Stuck”. Unhappy, lost, and very alone…

Having just moved to a new country, I had undergone the trials of making new friends, which was not easy for me. I was going through feelings of rejection, heartbreak… and in a lot of ways, feeling very far from what I felt was “normal” from the life I had known in Montreal.

And the worst part of it, was that I had lost my sense of creativity. I tend to be one of those people who has a trillion business or project ideas rolling around in my head at any given moment… yet this time… nothing. No ideas, no drive, no passion. It felt enormous, and heavy, and very scary.

As I was lying on that couch, feeling like shit about myself, not knowing what to do. All I wanted was for some kind of inspiration to pull me out of there. For some great magical idea to burst forth that allowed me to get excited again, feel creative, and be apart of something massive, something gorgeous, something that vibrates with everything I love in this world.

I have always lived with the fundamental belief that we are the ultimate Creators of our own lives… yet I had no juice left to even consider what that life might look like! What I wanted, who I wanted to be…

And then I got the urge to just dance it out…

I come from a background of much community and much dancing. I have been attending communal dance and music-based gatherings since as far as I can remember. From the kids’ 9-to-12 year-old dances that I attended religiously every week, to the rave scene I took to like a fish takes to water in my late teens / early twenties, everything about that community feel, being a part of something bigger, dancing all… night… long…. was always a big value of mine (I was slightly obsessed with the 60s, Woodstock, hippie scene in my teen years too. 🙂 )

So how did dancing help me get out from under the weight of my sadness and despair?

It helped me Open up to, and Awaken my Sensuality!

I have always had a very open and outward sexual energy. It has been interesting at times, but has also proven problematic, as women tended to become jealous and resist me for it, and as of a very young age, I got into some abusive sexual scenarios because this energy existed before I was old enough to even understand what sexuality was.

So technically, I had this energy, but never really knew what to do with it… how to channel it into something creative.

So as I sat on that couch, feeling the weight of life over my shoulders…
I strapped on my dancing shoes, and began working out to Sensual Dance videos in my living room almost every day (…permission to visualize this awkwardness granted). And almost immediately things began to open up.

As I allowed myself to enjoy these sensual motions, as I let go, moved my hips and opened my mind, my creativity started coming back. Ideas started to pour in, career concepts were popping back into my head. I was beginning to feel that drive to “keep going” again. The more I “flowed with the dance motions”, without thinking too much… the more I got out of my head, and into my body, the more my life began feeling like it was my own. As though I was an important part of something.

Having taken my first energy-work class at the tender age of 22, I knew that my Sacral Chakra was being activated big time!
If you don’t know what a chakra is, or what you should feed it, don’t worry, we’ll get into that. For now, what I want to share is that the Sacral Chakra is the energy centre that is directly linked to our creativity, our pleasure, our identity and ability to go-with-the-flow, to receive. It is located right below the navel, in that area where we, as women, can create life!

As this energy centre was being awakened, so was my drive to move forward… which helped me take a few more risks than I might when feeling overly-protective or untrusting. I was able to “wing it”, if you will, in various areas of life. And now that I have worked with this energy for a while, I have become quite aware that I was not “winging it” at all, in fact. I was simply listening to my intuition, and acting on it. And this is key.

This is when I understood that our Sacral area, our creative drive, our sensuality is very deeply linked to our intuitive abilities and the ability to “Create” or “Manifest” the life that we want.

Throughout 2015, I reached out and joined some inspiring groups, one that was originally lead by a friend from Montreal, Amanda Aitken, and has now morphed into a sisterhood-led FB group called The Illuminated Lotus… From being a part of this group, I met and received the help from some amazing Guides such as Veruschka Normandeau, Kittie Bernott and Elizabeth Locey, and took the big bold chance of investing in life coaching, both for business and my relationships.

I did not have the money for this, as I mentioned, I was in debt, so this was going straight to the credit card. But I was determined to discover and give absolutely everything I could into my purpose, my work, whatever that ended up being, however that ended up showing up…

And then Hillary Schneider happened… we started our coaching sessions in July-Aug of 2015 and this was when things started moving at ultra high-speed!

As I write out this story, I am still in awe of how much has occurred over the past 6 months… we are currently in early January, 2016.
With the help of Natalie Vartanian and Bob Schwenkler, my marriage is no longer failing miserably. There’s still a lot of work to do, but we have embarked on quite the unorthodox adventure… so all things considered, we are doing pretty damn fine.

I am on the Eve of hosting a retreat in HAWAII next month, in early February 2016 with a dear friend of mine Jessica Darlington, to Guide others on how to get in touch with their Sensuality, and how to become the ultimate Creators of their lives! I still can’t believe all of this is happening so quickly…
You can find the information about the retreat here: http://thesensualrevolution.com/retreats/

And I Shit-You-Not, I am currently sitting here, debt-free, and have a nice chunk of savings sitting in a bank account, waiting to be applied to the next creativity-building endeavor.

I had NEVER had savings, I had been in debt since I was a teenager, I had never known life with “a little extra money”. This shit… is… good.

So exactly how did I get here in such a short time? Each of these topics has a story to go with it and deserve a blog post of their own… but I’ll summarize quickly:

– I work with energies… yup, I said it. I basically got out of the driver’s seat and chose not to be in charge anymore… Something else was going to lead the way, and I was to listen. This is how I discovered my ability to tap into my intuitive powers, my connection to something bigger. Which has ironically given me MORE control over my life.

– I consider my Sensuality and Sexuality as a major part of the conversation and work at taking care of this area of my life as much as say finances, relationships, body health.

– I dance, I move, I am extremely self-aware energetically. I know when someone’s energy is not good for me, or when I somehow take this negative energy on as my own, and I now have the tools to handle this.

– I deal with the emotions that come up. When I feel something strong, unpleasant, uncomfortable, I try and catch it as early as possible (which is not always right on the spot… I have to admit) and I listen to what it has to say. Where does this come from, what is it referring to? Instead of getting down on myself about feeling this way or blaming someone else for what I’m feeling, which is far too easy, I deal with my shit. This is the hardest yet most effective work that I come up against. As I said, it’s a constant WIP.

– I have started communicating as openly and as authentically as possible… with everyone. This is also a work in progress. You’ll hear this from me a lot: “Hey, I’m not Gandhi, and even Gandhi had his moments”.

– I live intentionally. This is a game changer.

– I take time for myself. A LOT of time for myself. I realize just how much down-time I need to produce the crazy creative shit that I want to grow. And I allow myself to have it, without feeling bad, without feeling like I “should” be doing this or “should” be doing that. It’s bath time… and that’s MY time and I’m going to take it. I need a nap… I need to sit in mediation for a few minutes… because otherwise, a lot less gets done and in a much less efficient and heart-focused way.

– I quit drinking alcohol… Let’s just say… I’m a party girl at heart. I have been a party girl at heart since I was a young teenager. But it quickly came to my attention that every time I drank, I lost the connection to my super powers (this is what I like to call them…). This doesn’t work for me, so I dropped it!

– I have created a business that surrounds everything I value in life, everything I am naturally good at (and then some…) and everything I want to share with the world!! This has been the scariest part… Opening an online business that helps women get in touch with their Sensuality? What? Who the fuck “AM I” to do that? Yet… here I am, and here is Venusian Vibrations.

So let’s just say, I’ve lead a relatively colorful life so far… And that’s not about to change anytime soon, so if you want to know the stories behind all these changes, manifestations, energy connections and even the failures along the way, sign up on the list below! I promise to give you all the juicy details as I go.

If you are curious about what it would be like to work through some of your “stuckness” or “creative lows” with me, check out my services page for how we can connect, right here: http://thesensualrevolution.com/services/

Thanks and Spanx until next time,